submitted 14 minutes ago* by EVILCENSORSHIP

BOSTON BOMBING IS A FRAME JOB, They are screwing the government by coercing the over reaction we saw, using on the take cops and moles in positions of authority, the whole thing looks exactly like a gang-stalking frame job, right down to the “The FBI is Watching Us” and “Taxi Cab Confession.”* Four months ago, in telling my story, those were the names of two of the posts. Verbatim.

A taxi driver comes forward with a story that a full week ago, he received a full confession in his cab the day of the bombing. He’s taken seriously by who? Cab drivers are notorious employees of organized crime and the CIA. I’m a victim of gang stalking, and I’ve personally be threatened by so many cab drivers I can’t count them on my fingers. Afterwords, get this, I was framed for a crime, wake up. This stinks of a frame job.

My story is below, but you don’t have to believe me. In the links below its clear that TAXI drivers have been working for organized crime for decades. Gang stalking victims have been complaining about it, and I wrote about it months ago.

This is NO JOKE – LINK to Gang Stalking:

I’ve personally witnessed a vast conspiracy which specifically included the use of a significant number of taxi drivers, and corrupt FBI agents who were co-conspirators in an attempt to silence and discredit me. These taxi drivers appeared to be communicating to a centralized authority via some covert means, most likely mind control. I specifically wrote about taxi drivers being involved in a conspiracy months ago. Ironically, this post is called Taxi Cab Confession.

This conspiracy is real, and from what I have gathered a significant number of taxi drivers in major metropolitan areas are working with this syndicate. This has been known since the 80’s, when publicly available information disclosed that the Columbian drug cartels used a network of Taxi drivers for surveillance. These cartels, along with the Italian Mafia, are the main enforcement arm of what popular culture calls the Illuminati, they have globalized just like the rest of the world, and now work in concert with a faction of the US government.

It is very likely that these attacks have been caused by the Illuminati, framing the two brothers. This is their modus operandi, watching people for significantly long periods of time (Ironic title, The FBI is watching us.) with faux surveillance, and then framing them. In addition, I have witnessed Federal agents working with this conspiracy, and it’s very possible that the FBI surveillance was intentionally done as a cover operation, by corrupt agents. 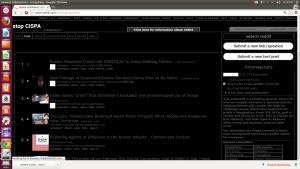 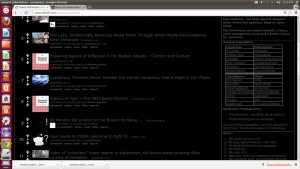 One thought on “NSA is attempting to CENSOR this post. Boston Frame Job Identical to Gang Stalking Tactics.”