This is an excerpt from Time and Chance: The race is not to Die Bold by Adam Marshall Dobrin
Download the actual Revelation of the Messiah in [ .PDF ] [ .epub ] [ .mobi ] or view online.

Older works Lit and Why, hot&y;, and From Adam to Mary are also available.

His Heart and SOL

Through the lyrics of rock and roll, He speaks a woven message that ties ancient scripture to modern music; and links history and langolier together with a message that takes a bit of thinking to grasp. Once you take the time to see what is being said, or not overtly said the light of the Menorah of Chanukah sheds understanding on more than just this one concept, but on the whole of the Bible. It’s more than just “sentences” hidden within words, they form the basis of a message–one which is lighting the history of humanity’s improvement in the microcosm that is America.

The light shines clearly from the Menorah, which is the lamp that lights the eight crazy nights; it’s a question, one that ties directly to the ‘Sang’ Rael’s elucidation of the two letter key “AH.” With this addition, it’s clearly a question that echoes through history to the Sons of Liberty, Men.. or All Humanity? It’s a critique, one that isn’t so obvious at first, but eventually proves that these particular names were chosen very specifically.

It’s highlighted clearly in Dazed and Confused, a scene where we are reminded that the Sons of Liberty were not really fighting for “Liberty” at the time; and it would take hundreds of years of American History for the rights of women to be restored, and slavery abolished. At the time, the name wouldn’t have made much sense–but with the evolution of society it shows clear foreknowledge. It’s the light of the word, that history itself is the proof that even thousands of years ago when the Menorah was first named… it was designed to be a question posed to a group that He knew would one day exist, and that the anachronism of their name would be obvious… only now.

It is the history that breathes the true word, and it is why we are the light of the flame; the living word. In They Stood up for Love by Live, he says he gave his “heart and soul” to the one, and it’s the one planet that is truly the Heart of Heaven, Earth. That’s the linguistic key to the second word, that it’s through a jump in time of the letter “h” that reveals that Earth and Heart are only one letter apart. It’s “art” at the heart of the name. In another Live song, he says “a million miles fall from grace, thank God I missed the ground…” and that word is the key to Earth. It shows that the meaning of Adamah and Earth are tied together… and are highlighted passively by the lyrics that are the key to revealing more than just a message. They reveal the way the message is being sent, subtly, and without our knowledge or understanding… through this passiveness, we are being given proof of the existence of the sender of the message. A message that ties Genesis to the Maccabees, and to America. 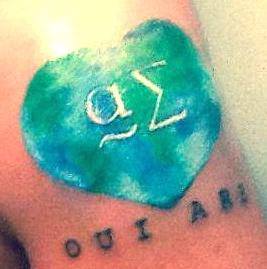 Some commentary, from a discussion

When I call it ambiguous, I am referring specifically to “AH,” which is a suffix whose linguistic meaning is something akin to “to swirl around.” In the case of Adamah, which is Earth… it’s a fairly easy jump to seeing how that could be “people.” It matches the reset of the sea definition, at http://sangrael.lamc.la. The first two letters are not ambiguous, and are reinforced by Genesis 1. It gives me comfort when I see a pattern in the very first sentence of the Bible.

In the case of “Allah,” the definition–which I was given.. by God–has its first “word” spelled out for us. That gives me a little more comfort, too.

Adding in the word “Menorah” makes it clear to me that we are talking about the “human species” and the first video goes so far as to say “this human story.” I think I’ve gotten a fair amount of evidence that this “AH” is not only intended to be “all humanity,” but that it’s intended to be the kind of thing we can derive… in exactly this way. I would be very surprised if there was not significant additional evidence corroborating this in other ways.

As far as “SOL,” I agree, it looks like I am arbitrarily deciding that it’s “Sons of Liberty,” but again… the song speaks clearly to me (the person who was “given” these definitions…”

I gave my heart and soul… to the one.

This content is currently released under the GNU GPL 2.0 license. Please properly attribute and link back to the entire book, or include this entire chapter and this message if you are quoting material. The source book is located at . and is written by Adam Marshall Dobrin.

Unless otherwise indicated, this work was written between the Christmas and Easter seasons of 2017 and 2020(A). The content of this page is released to the public under the GNU GPL v2.0 license; additionally any reproduction or derivation of the work must be attributed to the author, Adam Marshall Dobrin along with a link back to this website, fromthemachine dotty org.

This document is "living" and I don't just mean in the Jeffersonian sense. It's more alive in the "Mayflower's and June Doors ..." living Ethereum contract sense [and literally just as close to the Depp/Caster/Paglen (and honorably PK] 'D-hath Transundancesense of the ... new meaning; as it is now published on Rinkeby, in "living contract" form. It is subject to change; without notice anywhere but here--and there--in the original spirit of the GPL 2.0. We are "one step closer to God" ... and do see that in that I mean ... it is a very real fusion of this document and the "spirit of my life" as well as the Spirit's of Kerouac's America and Vonnegut's Martian Mars and my Venutian Hotel ... and *my fusion* of Guy-A and GAIA; and the Spirit of the Earth .. and of course the God given and signed liberties in the Constitution of the United States of America. It is by and through my hand that this document and our X Commandments link to the Bill or Rights, and this story about an Exodus from slavery that literally begins here, in the post-apocalyptic American hartland. Written ... this day ... April 14, 2020 (hey, is this HADAD DAY?) ... in Margate FL, USA. For "official used-to-v TAX day" tomorrow, I'm going to add the "immultible incarnite pen" ... if added to the living "doc/app"--see is the DAO, the way--will initi8 the special secret "hidden level" .. we've all been looking for.

Nor do just mean this website or the totality of my written works; nor do I only mean ... this particular derivation of the GPL 2.0+ modifications I continually source ... must be "from this website." I also mean *the thing* that is built from ... bits and piece of blocks of sand-toys; from Ethereum and from Rust and from our hands and eyes working together ... from this place, this cornerstone of the message that is ... written from brick and mortar words and events and people that have come before this poit of the "sealed W" that is this specific page and this time. It's 3:28; just five minutes--or is it four, too layne.

This work is not to be redistributed according to the GPL unless all linked media on Youtube and related sites are intact--and historical references to the actual documented history of the art pieces (as I experience/d them) are also available for linking. Wikipedia references must be available for viewing, as well as the exact version of those pages at the time these pieces were written. All references to the Holy Bible must be "linked" (as they are or via ... impromptu in-transit re-linking) to the exact verses and versions of the Bible that I reference. These requirements, as well as the caveat and informational re-introduction to God's DAO above ... should be seen as material modifications to the original GPL2.0 that are retroactively applied to all works distributed under license via this site and all previous e-mails and sites. /s/ wso


If you wanna talk to me get me on facebook, with PGP via FlowCrypt or adam at from the machine dotty org